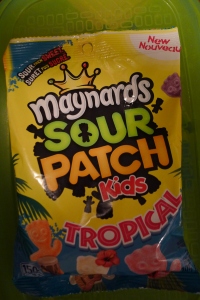 A few months ago, I made a promise to myself that I wouldn’t buy candy. This past week has been difficult for me, and when I’m stressed, promises may get broken. All my life, I’ve only known the traditional Sour Patch Kids, which were my favorite candy growing up. When Blue was introduced, that was exciting for me and blue raspberry did not disappoint. It is very rare to find unusual flavors in Canada where we live, so when I found a Tropical mix, I couldn’t say no. In the US, I could imagine finding a bag of Tropical Sour Patch Kids in every grocery store, but not in Canada. Here is my review of the tropical flavors, from most tasty to least tasty, to give you an idea of what to expect:

Orange – Tropical Twist; This flavor definitely lives up to the name. Tastes mostly like mangoes with some other tropical fruits mixed in. I cannot tell what fruits they are exactly, but the flavor is good for artificial tropical. Mango and Pineapple? Mango, pineapple, and orange? Who knows!

White – Pineapple; It’s not bad, and but I thought it was Pina Colada. Had they named it, “Pina Colada,” you would instantly know what flavor this is as soon as it hits your tongue? Also, this candy is white – not yellow, so I don’t know why their site features this flavor as a yellow candy. Pineapple-coconut or whatever this candy is by default isn’t my favorite candy flavor so I cannot give it first place. However, I’m impressed by this one.

Pink – Paradise Punch; Given that description, I had no idea what to expect. It didn’t taste bad but it didn’t taste great either. It definitely passed in terms of the sour factor. I love sour things, and Pink was the sourest of all 4 flavors. However, when it changed to sweet, that’s where it went from good to bad.

Purple – Passionfruit; This is an unusual flavor and I expected better, honestly. Passionfruit was the reason I bought these Sour Patch Kids in the first place. Overall, this flavor was the worst of the bunch and purple didn’t taste like passionfruit to me. This flavor possesses a very artificial, chemical flavor straight out of a laboratory.

I won’t be buying Tropical Sour Patch Kids again. In comparison to original flavors in terms of tastiness, these tropical kids were nowhere close. Tanginess? Probably. The Pink is definitely the tangiest of the bunch but compared to the original flavors, these flavors are just “meh”. Tropical candy isn’t my preference when it comes to artificial flavors so this probably affects my rating. See for yourself: try them and rate them. See if they live up to the original flavors and let me know what you think of Tropical Sour Patch Kids in the comments below.↓